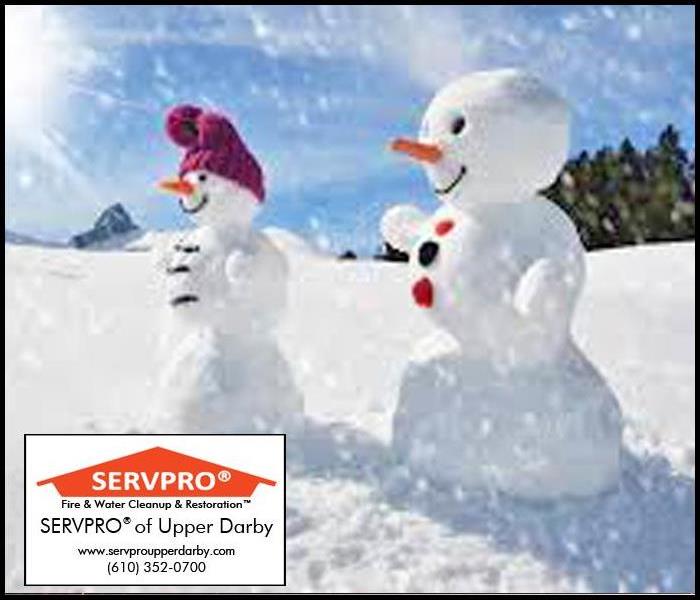 SERVPRO of Upper Darby is dedicated to responding immediately to water and storm damage emergencies.

1.   IT SNOWS WHERE YOU LEAST EXPECT IT.

Snow has been known to touch down anywhere from the Sahara Desert to Hawaii – even the driest place on Earth isn’t immune.  In 2011, the Atacama Desert in Chile received nearly 32 inches of snow, thanks to a rare cold front from Antarctica.

2.   SNOWFLAKES COME IN ALL SIZES.

The average snowflake ranges from a size slightly smaller than a penny to the width of a human hair, but according to some unverified sources, they can grow much larger.  Witnesses of a snowstorm in Fort Keogh, Montana, in 1887, claimed to see saucepan-sized crystals fall from the sky.  If true, that would make them the largest snowflakes ever spotted, at around 15 inches wide!

The air doesn’t need to be super moist to produce impressive amounts of snow.  Unlike plain rainfall, a bank of fluffy snow contains lots of air that adds to its bulk.  That’s why what would have been an inch of rain in the summer, equals about 10 inches of snow in the colder months.

4.   YOU CAN HEAR THUNDERSNOW WHEN THE CONDITIONS ARE RIGHT.

If you’ve ever heard the unmistakable rumble of thunder in the middle of a snowstorm, that’s not your ears playing tricks on you.  It’s likely thundersnow, a rare winter weather phenomenon that’s most common near lakes.  When relatively warm columns of air rise from the ground and form turbulent storm clouds in the sky during the winter, there is potential for thundersnow.  A few more factors are still necessary for it to occur – namely air that is warmer than the cloud cover above it, and wind that pushes the warm air upwards.

This is at least true in the case of snowflakes with broad structures, which tend to act as parachutes.  Snow that falls in the form of pellet-like graupel travels to Earth at a much faster rate.

6.    IT DOESN’T TAKE LONG FOR THE TEMPERATURE TO DROP.

Rapid City, South Dakota weather records from January 10, 1911, show just how fast temperatures can plummet.  The day started out at a pleasant 55°F.  Then, over the course of 15 minutes, a wicked cold front brought the temperature down to 8°F.  This day still holds the record for the quickest cold snap in history!

7.   THE EARTH IS CLOSEST TO THE SUN DURING THE WINTER.

Every January (the start of the winter season in the northern hemisphere), the Earth reaches the point in its orbit that it is nearest to the Sun.  Despite some common misconceptions, the seasonal drop in temperature has nothing to do with the distance of our planet from the Sun.  It instead has everything to do with which direction the Earth’s axis is tilting, which is why the two hemispheres experience winter at different times of the year.

This comes out to total approximately 137 pounds of salt per person!

9.   THE SNOWIEST CITY ON EARTH IS IN JAPAN.

Aomori City, in northern Japan, receives more snowfall than any major city on the planet.  Each year, citizens are pummeled with 312 inches (or about 26 feet) of snow on average!

Something strange happened in northwest Siberia – mysterious, giant snowballs began washing up on a beach along the Gulf of Ob. It turns out that these ice orbs were formed naturally by the rolling motions of wind and water. With some spheres reaching nearly 3 feet in width, you wouldn’t want to use this frozen ammunition in a snowball fight!

12.   CITIES ARE FORCED TO DISPOSE OF SNOW IN CREATIVE WAYS.

When snow piles up too high for a city to manage, it’s usually hauled away to parking lots, or other wide open spaces, where it can sit until the weather warms up.  During particularly snowy months, cities are sometimes forced to dump snow into the ocean, only to be met with criticism from environmental activists.  Some cities employ snow melting machines that use hot water to melt 30 to 50 tons of snow per hour.  This method is quick, but costly — a single snow melting machine can cost $200,000, and burn 60 gallons of fuel in one single hour of use.

13.   WET SNOW IS BEST FOR SNOWMAN BUILDING, ACCORDING TO SCIENCE.

Physics confirms what you’ve likely known since childhood - snow on the wet or moist side, is best for building your own backyard Frosty the Snowman.  One scientist pegs the perfect snow-to-water ratio at 5:1.

Snow crystals usually form unique patterns, but there’s at least one instance of identical snowflakes in the record books. In 1988, two snowflakes collected from a Wisconsin storm, were confirmed to be twins at an atmospheric research center in Colorado.

15.   THERE IS A DIFFERENCE BETWEEN FREEZING RAIN AND SLEET.

Freezing rain and sleet can both have scary effects on driving conditions, but their formations differ in some key ways.  Both types of precipitation occur when rain formed in warm air passes through a layer of cold air near the ground.  Thicker layers of cold air create sleet – a slushy form of water that’s semi-frozen by the time it reaches the Earth.  Thinner layers don’t give rain enough time to freeze until it hits the surface of the ground, which then forms a thin coat of ice wherever it lands.

When you are dealing with winter storms, flooding and water damage, immediate action is crucial.  You should choose the company with storm damage experience and expertise that has the resources and equipment to handle the job.  SERVPRO of Upper Darby, PA can immediately respond to storm and flooding conditions.

Call SERVPRO of Upper Darby, PA at (610) 352-0700 for all your cleaning, water damage, fire damage and mold remediation needs!